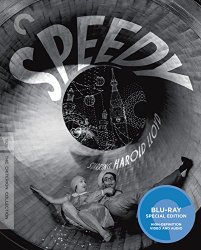 Speedy was the last silent feature to star Harold Lloyd (Safety Last!)—and one of his very best. The slapstick legend reprises his “Glasses Character,” this time as a good-natured but scatterbrained New Yorker who can’t keep a job. He finally finds his true calling when he becomes determined to help save the city’s last horse-drawn trolley, which is operated by his sweetheart’s crusty grandfather. From its joyous visit to Coney Island to its incredible Babe Ruth cameo to its hair-raising climactic stunts on the city’s streets, Speedy is an out-of-control love letter to New York that will have you grinning from ear to ear. BLU-RAY SPECIAL EDITION FEATURES • New 4K digital restoration • Musical score by composer Carl Davis from 1992, synchronized and restored under his supervision and presented in uncompressed stereo • Audio commentary featuring Bruce Goldstein, director of repertory programming at New York’s Film Forum, and Turner Classic Movies program director Scott McGee • In the Footsteps of “Speedy,” a new short documentary by Goldstein about the film’s New York locations • Selection of rare archival footage of baseball legend Babe Ruth, who has a cameo in the film, presented by David Filipi, director of film and video at the Wexner Center for the Arts in Columbus, Ohio • New visual essay featuring stills of deleted scenes from the film and narrated by Goldstein • Selection of Lloyd’s home movies, narrated by his granddaughter, Suzanne Lloyd • Bumping into Broadway, a 1919 Lloyd two-reeler, newly restored and with a 2004 score by Robert Israel • PLUS: An essay by critic Phillip Lopate