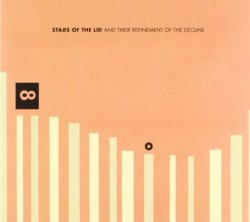 After the near symphonic exercise of engaging the void that was Tired Sounds of Stars of the Lid in 2001, it was hard to believe there was anything left to do. Wrong. Brian McBride and Adam Wiltzie emerged from the studio in early 2007 with the equally huge And Their Refinement of the Decline. The notion of symphonic here is, without doubt, still present, but not in any normal way. Over two very differently themed discs, and three LPs, Stars of the Lid engage long conceptual ideas from a place one can only call micro-minimalism. An obsession with drones fading in and out on all kinds of instruments is what takes precedent here, whether that be a string section, a solo cello, harp, trumpet or a children's choir. (Yes, all of them are here, and more.) Don't worry, all this deep fixation with drones and classical music doesn't mess up Stars of the Lid's sense of humor. The titles are still hilarious in places (the set opens with a piece titled "Dungtitled (In a Major)"). The sound of drones is prevalent on disc one, though the drones change and are actually held notes. Whether they are played live or simply articulated and then manipulated by electronics doesn't matter. The feeling of being washed over, being gently pulled under water to someplace where language no longer makes sense, feelings get all folded together and an overwhelming calm takes over - especially at loud volumes - as single notes are held by the strings for as long as five minutes. The aforementioned piece is like this, as are "The Evil That Never Arrived," and "Apreludes (In C Major)," which moves through one note for minutes at a time with an ever increasing dynamic and textural array of sounds and instruments and begins to feel like the opening theme of 2001: A Space Odyssey. Yet the real bottom line in these pieces, and to a lesser but no less relevant extent, is that these cuts feel like a part of an opening whole that is also at the end of something, like quiet exits from a long-form work, with the feelings of being finished, exhausted, lulled by the lack of energy and motion. It's impossible to say, but when engaging disc two, it feels almost as if it is a mirror image to Gavin Bryars' magnificent "The Sinking of the Titantic" (the second version). Here, where melody dissipates and disappears or never even arrives, as in "The Daughters of Quiet Minds," or the in-and-out of the ether feel in "That Finger on Your Temple Is the Barrel of My Raygun," where actual oceanic and perhaps ship sounds can be heard washing through the mix; and the piece is merely three notes in scale. The sense of drama and restless experimentation are portrayed in back to back pieces ("Humectez la Mouture" and "Tippy's Demise") where on the former a voice in French speaks out of an indescribable series of spaces and noises, and on the latter a cello harmonically plays with the all but absent "orchestra" who have disappeared into the actual feel of the piece rather than remained in it's mechanical parts. The set's final cut, "Hunting for Vegetarian Fuckface" begins with voices, muted yet telling, washed into the emerging sound, where chords express themselves, shift and change shape, color and dimension, becoming both something more and something less in the process. At over 17 minutes, more instruments are added, they emerge louder and are more "present" but remain under the guise of absence, as that thing that has already been wiped away. The single- and two-note lines that emerge from the slow, turtle-like pace of the track never move toward anything else even though they assert the theme in various dynamic ways on occasions before re-entering the shadow world of sound. Everything here is rounded. There are no edges on either disc, it's all fuzzy and yet brilliant to hear at the same time. It's music of such quiet and devastating power it can silence a room in five minutes without the volume knob on the stereo being manipulated. There are detractors - or better yet, cynics - who wonder why, and how, music like this.