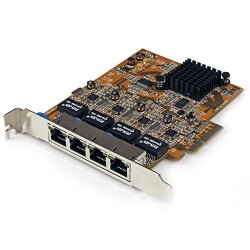 The ST1000SPEX42 4-port Ethernet Card is an IEEE 802.3/u/ab standards compliant PCIe network adapter, which adds connections to up to four separate high-speed Gigabit networks from a single desktop client, server or workstation. Suitable for any PCI Express (x4) enabled computer, this Gigabit Ethernet Network Adapter Card offers a practical, cost-effective resource for business, corporate or government environments, with support for high performance 4-channel networking and maximum throughput up to 1000Mbps in each direction (2000 Mbps total) - up to ten times faster than 10/100 Ethernet. Compatible with a broad range of operating systems, this versatile PCIe Gigabit NIC is suitable for many SMB and Enterprise applications such as virtualized environments that require multiple NICs (check your VM software for chipset compatibility). The ST1000SPEX42 is backed by a StarTech.com 2-year hardware warranty and free lifetime technical support.