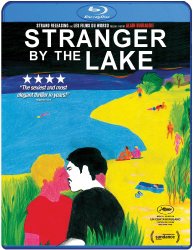 One of the most critically acclaimed films of the year, STRANGER BY THE LAKE has been described as a modern-day Hitchcockian masterpiece. A picturesque cruising spot in the countryside of France sets the scene between desire and murder. Franck, a regular at the lake, meets the handsome Michel and soon falls in love with the mysterious stranger. When a body is discovered in the lake, Franck and Michel soon become primary suspects of the investigation. STRANGER BY THE LAKE is a unique, erotic thriller of seduction and sexual obsession that builds to an unforgettable and terrifying climax. Bonus Features: -Interview with director Alain Guiraudie (HD) -Deleted Scenes* (HD) -Alternative Ending* (HD) -2 Short Films by Alain Guiraudie* (SD) -US & UK* Theatrical Trailers (HD) -Other Strand Releasing Trailers * Denotes Exclusive Blu-Ray Bonus Features