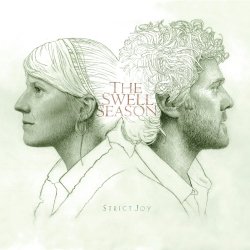 The Swell Season are Glen Hansard (from the Irish band the Frames) andMarketa Irglova (classically trained Czech pianist and vocalist). In 2007,Once, a film about two people meeting and falling in love on the streets ofDublin, became an indie phenomenon, as audiences everywhere respondedto the unassuming charm of the two leads, Glen and Marketa, and thebeautiful music they made together. On the way to going gold, the Oncesoundtrack brought the Swell Season onto the stage of the AcademyAwards, where the band won the Best Original Song award, and into thehearts of the audience and host Jon Stewart. Since then they have toured tosold-out venues as the Swell Season, Once has become a perennial top DVDrental and seller, and now the film is in development for a Broadwaymusical to open early in 2010.Now comes the much anticipated follow-up, Strict Joy, and from the firstnotes of first track Low Rising, the musical magic audiences found inOnce is back. The band returns to map the rocky peaks and valleys ofrelationships in songs like the haunting I Have Loved You Wrong, aMarketa feature, and the driving, anthemic The Rain. A featuredocumentary will make the festival rounds this fall, covering the making ofOnce and Glen and Marketa s musical coming together, but in themeantime, the beautiful songs of Strict Joy will tell their story.