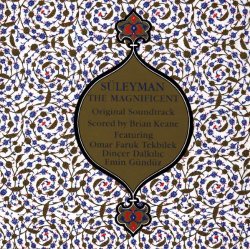 Suleyman the Magnificent is the soundtrack for the film of the same name which focuses on the life of the great Sultan of the Ottoman empire. Sultan Suleyman reigned from 1520-1566 and was renowned as a consummate reformer of law and administration. His was a golden age of art and architecture. Brian Keane's soundtrack embodies this historic sense of greatness and splendor. The music is at once exciting and profound. Keane has brilliantly scored traditional Turkish melodies and his own original melodies from a combination of authentic Turkish instruments. These instruments include the tanbur (long necked lute), daire (drum), kanun (plucked boxed zither), and kaval (rim-blown flute--a pastoral instrument associated with shepherds and nomads). The film aired on the PBS network and was a winner of the American Film Festival and the Ohio State Film Festival awards. It was produced in conjunction with the opening of an art exhibit at the National Gallery of Art in Washington, D.C. for which major funding for the film was provided by the Republic of Turkey.

Do you want ot get the Suleyman The Magnificent: Original Soundtrack?