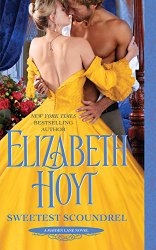 SHE'S TAKING CHARGEPrim, proper, and thrifty, Eve Dinwoody is all business when it comes to protecting her brother's investment. But when she agrees to control the purse strings of London's premier pleasure garden, Harte's Folly, she finds herself butting heads with an infuriating scoundrel who can't be controlled.HE'S RUNNING THE SHOWBawdy and bold, Asa Makepeace doesn't have time for a penny-pinching prude like Eve. As the garden's larger-than-life owner, he's already dealing with self-centered sopranos and temperamental tenors. He's not about to let an aristocratic woman boss him around . . . no matter how enticing she is.BUT LOVE CONQUERS ALLIn spite of her lack of theatrical experience-and her fiery clashes with Asa-Eve is determined to turn Harte's Folly into a smashing success. But the harder she tries to manage the stubborn rake, the harder it is to ignore his seductive charm and raw magnetism. There's no denying the smoldering fire between them-and trying to put it out would be the greatest folly of all . . .

Do you want ot get the Sweetest Scoundrel (Maiden Lane)?

Guilty as Sin: Uncovering New Evidence of Corruption and How Hillary Clinton and the Democrats De...
The 37th Parallel: The Secret Truth Behind America’s UFO Highway
The World Atlas of Coffee
The Heart Does Not Grow Back: A Novel
The Onion Book of Known Knowledge: A Definitive Encyclopaedia Of Existing Information
Incidents in the Life of a Slave Girl (Dover Thrift Editions)