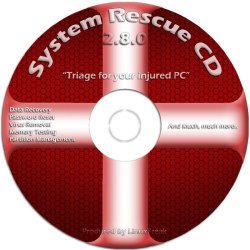 What is System Rescue CD? --------------------------------------------------- System Rescue Cd is a Linux system rescue disk available as a bootable CD-ROM for administrating or repairing your system and data after a crash. Please Note: This is NOT a Windows boot disc, and does not use any MS Windows technology or software to perform its tasks. IT WILL however, allow you to repair a broken MS Windows system, or at the very least, recover lost data from one. It aims to provide an easy way to carry out admin tasks on your computer, such as creating and editing the hard disk partitions. It comes with a lot of linux software such as system tools and basic tools. It can be used for both Linux and windows computers, and on desktops as well as servers. This rescue system requires no installation as it can be booted from a CD/DVD drive, but it can be installed on the hard disk if you wish. The kernel supports all important file systems (ext2/ext3/ext4, reiserfs, btrfs, xfs, jfs, vfat, ntfs), as well as network filesystems (samba and nfs). Some Included Tools GParted: creates, resizes, moves, copies partitions, and filesystems. Partimage: popular opensource disk image software which works at the disk block level ddrescue: Attempts to make a copy of a partition or floppy/Hard Disk/CD/DVD that has hardware errors, optionally filling corresponding bad spots in input with user defined pattern in the copy Ntfs3g: enables read/write access to MS Windows NTFS partitions Memtest+: to test the memory of your computer (first thing to test when you have a crash or unexpected problems) Network tools (Samba, NFS, ping, nslookup, ...): to backup your data across the network