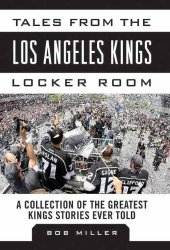 In Tales from the Los Angeles Kings Locker Room, Bob Miller shares 40 years of Hollywood hockey with fans, reminding them of the highs and lows of Los Angeles hockey, while entertaining them with behind-the-scenes looks into the history of the 2012 Stanley Cup championship team.As the “Voice of the Kings,” Miller has been part of the Kings experience from the era of original owner Jack Kent Cooke to the days of flamboyant Jerry Buss; from the team’s first true superstar, Rogie Vachon, to then-owner Bruce McNall’s trade that put Southern California on the hockey map—the acquisition of Wayne Gretzky in 1988.Join Miller as he skates through Kings history, examining off-the-wall personalities and the team’s greatest moments—from thrilling playoff victories to the Kings’ involvement in the Lakers’ acquisition of Kareem Abdul-Jabbar. You will read about the greatest personalities ever to don the royal black and silver—from the “Triple Crown” line to Jonathan Quick and today’s Kings—and relish the stories that make Tales from the Los Angeles Kings Locker Room the ultimate addition to any Kings fan’s library.

Do you want ot get the Tales from the Los Angeles Kings Locker Room: A Collection of the Greatest Kings Stories Ever Told (Tales from the Team)?

The Rosie Effect: A Novel
The Middle Class in Emerging Societies: Consumers, Lifestyles and Markets (Routledge Research in ...
The Secret Rescue: An Untold Story of American Nurses and Medics Behind Nazi Lines
Hit Refresh: The Quest to Rediscover Microsoft’s Soul and Imagine a Better Future for Everyone
Warriors Don’t Cry: A Searing Memoir of the Battle to Integrate Little Rock’s Central...
The Hermitage Collections: Volume I: Treasures of World Art; Volume II: From the Age of Enlighten...