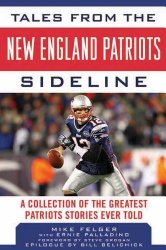 This revealing look at the first forty years of the New England Patriots captures the stories of passion, power, and struggles of one of the most remarkable franchises in sports. True Pats fans know that while today the team’s owner, coach, and stadium all rank among the best in the NFL, the early years were a much harder road. For decades the Patriots was a team known for having comically inept management and ownership, as well as the worst stadium in the NFL. Now die-hard New England fans will relive the whole history of the Patriots—from past pain to present glory. This newly revised edition of Tales from the New England Patriots Sideline covers it all. Former players share the hilarious and shocking tales of the team’s early tumultuous years; the glaring absurdity of which only highlights the present golden age. With an epilogue by Bill Belichick, and newly revised to include the Patriots three Super Bowls of the new millennium, this is a must-have for any football fan.

Do you want ot get the Tales from the New England Patriots Sideline: A Collection of the Greatest Patriots Stories Ever Told?