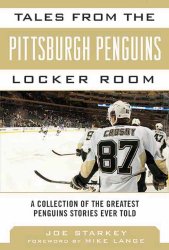 Readers have the chance to meet the Pittsburgh Penguins, one of the wildest, wackiest, most wonderful sports franchises that ever waddled its way across North America. If Penguins fans are not shedding tears of sadness, they are crying for joy or simply laughing so hard they cannot stop. No franchise has survived more near-death experiences than this one, which twice went bankrupt and many times escaped the threat of relocation. In 1975, things were so tough that players had their postgame oranges taken away.Nevertheless, they have persevered. Known across the league as lovable losers for its first 24 years, the team began the climb to the top in the 1990s, winning the Stanley Cup twice in that decade and once more in 2009. In Tales from the Pittsburgh Penguins Locker Room, sportswriter Joe Starkey takes fans inside the locker rooms, onto the team buses (including the one defenseman Bryan “Bugsy” Watson hijacked), and behind the personalities that have shaped Penguins hockey since 1967.