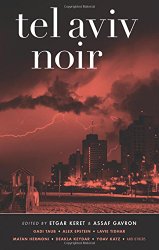 Gon Ben Ari's story "Clear Recent History" has been named a finalist for the Private Eye Writers of America Shamus Award for Best P.I. Short Story!"This consistently strong collection showcases a group of Israeli writers who are not well known in the U.S. Definitely one of the highlights in the long-running Akashic series."--Booklist, Starred review"May be the very best in a generally solid series....This collection escapes the limits of formula fiction and sets the bar high for subsequent Noir offerings. The genre is hot, Tel Aviv is exotic, and this volume is outstanding. What's not to like?"--Library Journal, Starred reviewOne of Jewish Journal's Noteworthy Books for the New Year"Even in the Holy Land, people find ingenious ways to screw up their own lives, as the latest entry in Akashic's Noir Series proves....Editors Keret and Gavron stress not what makes Tel Aviv unique but what it has in common with other cities: its people's endless, often fruitless struggle to cash in on a losing hand."--Kirkus Reviews"There's a marvelous underlying tension to [the stories], a paranoid tinge, as if some vast monstrous conspiracy is lurking behind every misdeed and bad stroke of luck."--San Francisco Book Review"The collection reflects much of the daily reality of the city, but not the sort one is likely to read in tour guides....There's a complexity and virtuosity to plot and prose that leaves the reader with a sense of satisfaction and appreciation, despite the typically devastating denouement of the tales....Superb."--PopMatters"Readers interested in exploring the dark side of Tel Aviv will be fascinated by these short pieces of noir literature."--Times of IsraelAkashic Books continues its groundbreaking series of original noir anthologies, launched with the summer '04 award-winning best seller Brooklyn Noir. Each book is comprised of all-new stories, each one set in a distinct neighborhood or location within the respective city. For Tel Aviv Noir, Etgar Keret and Assaf Gavron have masterfully assembled some of Israel's top contemporary writers into a compulsively readable collection.From the introduction by Etgar Keret:"In spite of its outwardly warm and polite exterior, Tel Aviv has quite a bit to hide. At any club, most of the people dancing around you to the sounds of a deep-house hit dedicated to peace and love have undergone extensive automatic-weapons training and a hand-grenade tutorial...The workers washing the dishes in the fluorescent-lit kitchen of that same club are Eritrean refugees who have crossed the Egyptian border illegally, along with a group of bedouins smuggling some high-quality hash, which the deejay will soon be smoking on his little podium, right by the busy dance floor filled with drunks, coked-up lawyers, and Ukrainian call girls whose pimp keeps their passports in a safe two streets away. Don't get me wrong--Tel Aviv is a lovely, safe city. Most of the time, for most of its inhabitants. But the stories in this collection describe what happens the rest of the time, to the rest of its inhabitants. From one last cup of coffee at a café targeted by a suicide bomber, through repeat visits from a Yiddish-speaking ghost, to an organized tour of mythological crime scenes that goes terribly wrong, the stories of Tel Aviv Noir reveal the concealed, scarred face of this city that we love so much."Featuring brand-new stories by: Etgar Keret, Gadi Taub, Lavie Tidhar, Deakla Keydar, Matan Hermoni, Julia Fermentto, Gon Ben Ari, Shimon Adaf, Alex Epstein, Antonio Ungar, Gai Ad, Assaf Gavron, Silje Bekeng, and Yoav Katz; translated by Yardenne Greenspan.