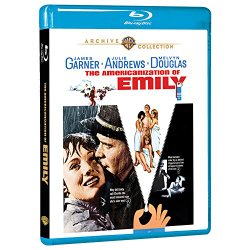 U.S. Navy honchos in World War II London have a humdinger of a war on their hands. Now they need a hero to go with it. They want the first American fatality of D-Day to be a sailor, to glorify the navy's effort. Victor/Victoria's Julie Andrews and James Garner headline this earlier milestone comedy from screenwriter Paddy Chayefsky (Network) and director Arthur Hiller (also teamed later on The Hospital). Garner plays Charlie Madison, an officer who cares nothing about glory. That attracts war widow Emily Barham (Andrews), who's had her fill of seeing men go to war and never return. But the pair's culture-clash romance is in peril when Charlie sees that the line to become the navy's defunct hero forms behind him. Your line for hilarious antiwar satire and life-affirming love forms here!