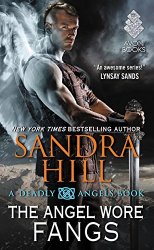 New York Times bestselling author Sandra Hill continues her sexy Deadly Angels series, as a Viking vangel’s otherworldly mission pairs him with a beautiful chef who whets his thousand-year-old appetite . . .Once guilty of the deadly sin of gluttony, thousand-year-old Viking vampire angel Cnut Sigurdsson is now a lean, mean, vampire-devil fighting machine. His new side-job? No biggie: just ridding the world of a threat called ISIS while keeping the evil Lucipires (demon vampires) at bay. So when chef Andrea Stewart hires him to rescue her sister from a cult recruiting terrorists at a Montana dude ranch, vangel turns cowboy. Yeehaw!The too-tempting mortal insists on accompanying him, surprising Cnut with her bravery at every turn. But with terrorists stalking the ranch in demonoid form, Cnut teletransports Andrea and himself out of danger—accidentally into the tenth-century Norselands. Suddenly, they have to find their way back to the future to save her family and the world . . . and to satisfy their insatiable attraction.

Do you want ot get the The Angel Wore Fangs: A Deadly Angels Book?

American Icon: Alan Mulally and the Fight to Save Ford Motor Company
Mark Rothko: The Works on Canvas (Yale Language)
Racing to the Finish: My Story
Embraced by the Light
Stepbrother Dearest
How to Be Alone: If You Want To, and Even If You Don’t