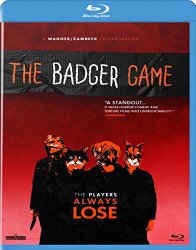 It's the twisted indie hit that's been hailed as fun (Ain't It Cool), intense (Horror News) and excellent all around (Indyred): When a young woman discovers that her wealthy boyfriend is married, she and three friends hatch a kidnapping-and-extortion scheme known in criminal circles as a badger game to teach him a lesson and score an easy $2 million. But they'll soon learn certain games can quickly spin out of control...and that one seemingly perfect crime is about to go horribly wrong. Augie Duke, Patrick Cronen, Jillian Leigh, Sam Boxleitner and Sasha Higgins star In this award-winning comedy/shocker written and directed by Josh Wagner & Thomas Zambeck that Icons Of Fright calls a rare treat of a thriller, packed to the gills with drama, terror and tension! Special Features: Audio Commentary with Writer/Directors Joshua Wagner and Thomas Zambeck, and Composer London May Audio Commentary with stars Augie Duke, Jillian Leigh, and Sasha Higgins Cast and Crew Interviews from the premiere in Downtown LA