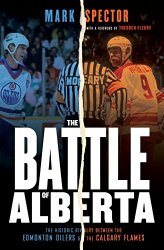 An up-close look at the rivalry between the Calgary Flames and the Edmonton Oilers, told from the perspective of those that were there. Sports writer and on-air personality Mark Spector pays tribute to the province's hockey heyday with a unique blend of humour and homage.     "I hated every single guy on the Oilers, 'cause they all hated me." --Tim Hunter, the Calgary Flames     In the 1980s, the province of Alberta was home to the two best hockey teams in the NHL. Aptly dubbed "Death Valley" due to the sheer talent and ability of its players, the province not only begat rivalry with other NHL teams, but also sparked fierce competition within its own borders. Thus began The Battle of Alberta, the historic struggle between the Edmonton Oilers and the Calgary Flames.     In The Battle of Alberta, veteran sports journalist Mark Spector presents homage to Albertan hockey, and the two teams that inspired one of the most bitter competitions in NHL history. Through exclusive interviews with coaches, trainers, and players, Spector provides an unbiased, often hilarious look at the brawls, the clashes, and the schemes.      A chronicle of an unforgettable time in hockey history (filled with never-before-seen photographs), The Battle of Alberta is guaranteed to entertain fans and educate newcomers alike.

The History of the Decline and Fall of the Roman Empire, Vol. 1
Sweet Ruin (Immortals After Dark)
Batman Classic: Batman Phonics Fun (My First I Can Read)
Ghost Towns of Route 66
The Great Influenza: The Story of the Deadliest Pandemic in History
The Reiki Manual: A Training Guide for Reiki Students, Practitioners, and Masters