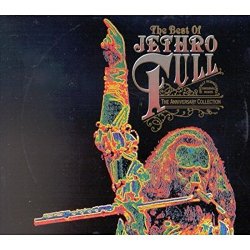 'The Best of Jethro Tull The Anniversary Collection,' released in 1993, is a best-of box set by British rock group Jethro Tull. Included are some of the band's biggest and best hits spanning from 1968 to 1991. A two disc collection, 'The Anniversary Collection' compiles releases from 1968-1974 on disc one, and releases from 1975-1991 on disc two, including early hits like, 'This Was' to Tull's later work, like 1991's 'Catfish Rising.' With such a comprehensive collection, it's interesting to hear the changing roster of characters (the original lineup has changed many times, but for Ian Anderson - vocals, flute - the one constant). Jethro Tull has managed to persevere for decades because they remain a scion of hard rock and ingenuity, and the plethora of amazing tracks included on 'The Anniversary Collection' is testament to this. Included are two tracks from, 'Crest of a Knave' - the album that won Jethro Tull the 1989 Grammy for Best Hard Rock/Heavy Metal Performance in 1989, the first Grammy of its kind over awarded. This is the definitive collection of Jethro Tull, and fans, old and new alike, should not miss owning 'The Best of Jethro Tull The Anniversary Collection.'