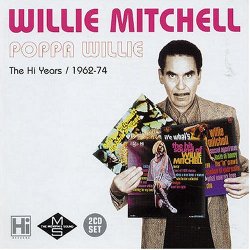 A two-disc, 51-song set, with one disc devoted to Mitchell originals and one to covers he made between 1962 and 1974. This is an extensive collection of trumpeter/producer Mitchell's dance-inducing, funky brand of soul music. Like fellow instrumentalists of the day -- Booker T., Jr. Walker, King Curtis, and the JBs -- Mitchell was helping to define a groove that created some of the best instrumental soul ever made. His cover of the Ousley/Dixon-penned "Soul Seranade," which rivals that of King Curtis, is here, as well as his first Hi single, "The Crowd, Part 1," and his first chart-topper, "20-75." The set also includes "That Driving Beat" and "Everything Is Gonna Be Alright" with vocals by Don Bryant; rarities such as the Hammond B-3-filled, mid-tempo "Six to Go" and the raw, slow groove "On the Other Side"; and covers as diverse as "One Mint Julep" and "Turn Back the Hands of Time." Mitchell was appointed vice president of Hi Records in 1970, when he let up on touring and performing to focus on work as a producer. Some of his finer work in that context is here as well, such as recordings of his old touring band (under the name the Hi Rhythm Section) and his last release, a cover of Herb Alpert's sultry score "Last Tango in Paris." ~ Travis Drageset, All Music Guide