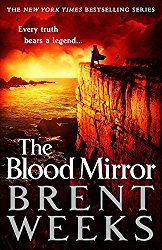 The nail-biting continuation to the Lightbringer series from New York Times bestseller Brent Weeks. When does an empire fall?The Seven Satrapies have collapsed into four-and those are falling before the White King's armies.Gavin Guile, ex-emperor, ex-Prism, ex-galley slave, formerly the one man who might have averted war, is now lost, broken, and trapped in a prison crafted by his own hands to hold a great magical genius. But Gavin has no magic at all. Worse, in this prison, Gavin may not be alone.Kip Guile will make a last, desperate attempt to stop the White King's growing horde. Karris White attempts to knit together an empire falling apart, helped only by her murderous and possibly treasonous father-in-law Andross Guile.Meanwhile, Teia's new talents will find a darker use-and the cost might be too much to bear.Together, they will fight to prevent a tainted empire from becoming something even worse. LightbringerThe Black PrismThe Blinding KnifeThe Broken EyeThe Blood MirrorFor more from Brent Weeks, check out:Night AngelThe Way of ShadowsShadow's EdgeBeyond the ShadowsNight Angel: The Complete Trilogy (omnibus)Perfect Shadow: A Night Angel Novella (e-only)The Way of Shadows: The Graphic Novel

Uniquely Human: A Different Way of Seeing Autism
The Nomos of the Earth in the International Law of Jus Publicum Europaeum
Bread, Wine, Chocolate: The Slow Loss of Foods We Love
A Game for Hooligans: The History of Rugby Union
Am I small? Eimai mikre?: Children’s Picture Book English-Greek (Bilingual Edition)
See San Francisco: Through the Lens of SFGirlbyBay