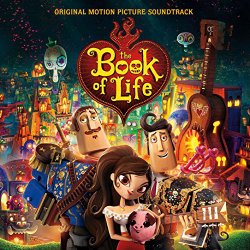 Original Motion Picture Soundtrack"The Book of Life" Score by Academy Award® Winner Gustavo SantaolallaFeaturing musical performances by Plácido Domingo, Cheech Marin, Diego Luna and Zoe SaldanaAbout the Music"The Book of Life" soundtrack features score music by Gustavo Santaolalla as well as an eclectic mix of pop and Latin songs. Oscar® winning composer Gustavo Santaolalla is best known for his work writing movie scores and producing albums. He has won two Academy Awards® for Best Original Score for his work on "Babel" and "Brokeback Mountain," for which he also won a Golden Globe® Award. Most recently, Santaolalla composed the scores for "August: Osage County" and the Jack Kerouac movie, "On the Road," and he is currently writing the score for the stage musical "Pan s Labyrinth." The soundtrack also includes songs by Café Tacuba, La Santa Cecilia & Biz Markie along with songs performed by cast members Plácido Domingo, Diego Luna, Cheech Marin and Zoe Saldana.About the MovieFrom producer Guillermo del Toro and director Jorge Gutierrez (comes an animated comedy with a unique visual style. "The Book of Life" is the journey of Manolo, a young man who is torn between fulfilling the expectations of his family and following his heart. Before choosing which path to follow, he embarks on an incredible adventure that spans three fantastical worlds where he must face his greatest fears. "The Book of Life" encourages us to celebrate the past while looking forward to the future. Starring Channing Tatum, Zoe Saldana, Christina Applegate, Ice Cube, Ron Perlman, Cheech Marin and Hector Elizondo, "The Book of Life" opens nationwide on October 17, 2014.bookoflifemovie.comsonymasterworks.com