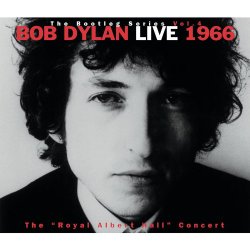 In 1965, Dylan went electric. The resulting world tour created controversy wherever he went, winding up with a series of confrontational shows in Europe, of which this is the most notorious. The group has roared through classics like Just Like Tom Thumb's Blues; One Too Many Mornings , and Ballad of a Thin Man to a definite mixed reaction. Suddenly a shout rings out in the crowd: "Judas! Judas!" Dylan responds in kind: "I don't believe you. You're a liar." He then turns to the musicians and says, off mike but clearly audible, "Play !@#$ing loud!" With perfect timing, the band (that is, The Band) crashes into a furious eight-minute Like a Rolling Stone and the rest, ladies and gentlemen, is history. This 2-CD set contains the complete concert, mastered from two different sets of tapes, includes a 56-page booklet.