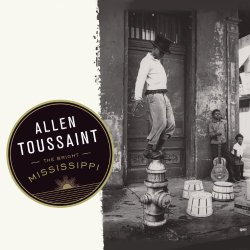 Through his work as producer, composer, arranger and consummate session man, New Orleans native Allen Toussaint has truly earnedliving-legend status. He's collaborated on landmark recordings for such artists as Ernie K. Doe, Lee Dorsey, Dr. John, the Meters, thePointer Sisters and Labelle and released acclaimed albums of his own. The 70 year-old pianist, already a Rock and Roll Hall of FameInductee, was the recipient, on the recent Grammy Awards telecast, of the Recording Academy s prestigious Trustee Award, honoring a lifetime in the studio, both behind the scenes and in front of the mic. On The Bright Mississippi, his Nonesuch debut, Toussaint continues to break new ground with his first jazz-oriented set, displaying the same effortless swing and relaxed charm he brought to his classic rock and roll sides. He salutes Big Easy stars of a previous generation, the jazz greats who, in the early 20th century, built the genre from the ground up and turned the ears of the world to New Orleans.

Up & Away
Voice Lessons To Go v.1-4 The Complete Set
Further
Funhouse
Casey Kasem Presents: America’s Top 10 Through the Years – The 1960s
Appassionato