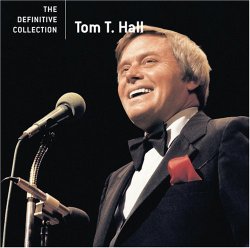 His songs are among the most familiar in country music, yet he hasn't even recorded some of them. He counts bluegrass pioneer Earl Scruggs and novelist Kurt Vonnegut among his friends. He has been the most unusual singer songwriter...one who didn't recycle himself after the first album. He married folk music's narrative drive to country music's melodicism and economy. And when Alan Jackson took his song Little Bitty to the top of the country charts in 1996, it proved that it's always a little premature to write off Tom T. Hall. Country music began with narrative ballads, but no one has stretched the medium or used it as a vehicle to say something trenchant about the human condition like Tom T. Hall. If most country songwriters look inward, he looks outward with ironic detachment. He was raised on traditional bluegrass music, and still says that it's his favorite music, but bluegrass is rife with judgmentalism. Tom T. Hall's music is almost entirely free of judgments. He relates the story, leaving you to draw what conclusion you will.