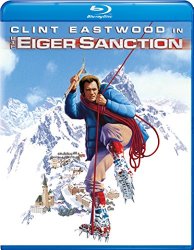 Clint Eastwood directs and stars in The Eiger Sanction, an international action thriller set in the Swiss Alps. Jonathan Hemlock (Eastwood) is a retired professional assassin who has adapted a calmer lifestyle with a pursuit of art collecting. When a close friend is murdered, Hemlock is suddenly forced out of retirement to hunt the deadly double agent that killed his comrade. The search takes him on a breathtaking journey up the Swiss Alps with a team of mountain climbers, one of which is unidentified target. Co-starring George Kennedy, The Eiger Sanction features some of the most exciting mountain climbing sequences ever captured on film.