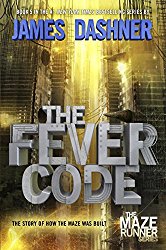 All will be revealed in the fifth book in James Dashner’s #1 New York Times   bestselling Maze Runner series. This is the story that fans all over the world have been waiting for—the story of how Thomas and WICKED built the Maze. You will not want to miss it.    Once there was a world’s end.    The forests burned, the lakes and rivers dried up, and the oceans swelled.    Then came a plague, and fever spread across the globe. Families died, violence reigned, and man killed man.    Next came WICKED, who were looking for an answer. And then they found the perfect boy.    The boy’s name was Thomas, and Thomas built a maze.    Now there are secrets.     There are lies.     And there are loyalties history could never have foreseen.     This is the story of that boy, Thomas, and how he built a maze that only he could tear down.    All will be revealed.      A prequel to the worldwide Maze Runner phenomenon, The Fever Code is the book that holds all the answers. How did WICKED find the Gladers? Who are Group B? And what side are Thomas and Teresa really on? Lies will be exposed. Secrets will be uncovered. Loyalties will be proven. Fans will never see the truth coming. Before there was the Maze, there was The Fever Code.    Don’t miss The Maze Runner and Maze Runner: The Scorch Trials, now major motion pictures from Twentieth Century Fox, starring Dylan O’Brien, Kaya Scodelario, Thomas Brodie-Sangster, Rosa Salazar, Giancarlo Esposito, and Aidan Gillen. And look for James Dashner’s new bestselling series the Mortality Doctrine: The Eye of Minds, The Rule of Thoughts, and The Game of Lives. Praise for the Maze Runner series: A #1 New York Times Bestselling Series A USA Today Bestseller A Kirkus Reviews Best Teen Book of the Year An ALA-YASLA Best Fiction for Young Adults Book An ALA-YALSA Quick Pick   "[A] mysterious survival saga that passionate fans describe as a fusion of Lord of the Flies, The Hunger Games, and Lost."—EW.com “Wonderful action writing—fast-paced…but smart and well observed.”—Newsday   “[A] nail-biting must-read.”—Seventeen.com   “Breathless, cinematic action.”—Publishers Weekly   “Heart pounding to the very last moment.”—Kirkus Reviews   “Exclamation-worthy.”—Romantic Times  "Take a deep breath before you start any James Dashner book."—Deseret News

The Lion, the Witch and the Wardrobe (The Chronicles of Narnia, Book 2)
Free Spirit Coloring Book (Coloring Is Fun)
Healthcare Information Technology Exam Guide for CompTIA Healthcare IT Technician and HIT Pro Cer...
Rising to the Challenge: My Leadership Journey
Airline Visual Identity 1945-1975
Recursion: A Novel