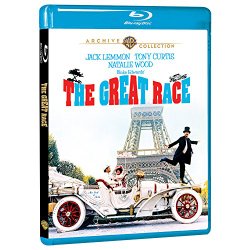 From comedy master Blake Edwards comes this classic, riotous all-star farce. It is the turn of the previous century, and American automakers are worried about how to sell their new product to an uneducated public.Professional daredevil and all-around good guy, The Great Leslie,convinces the automakers that a race from New York to Paris (westwardacross America, the Bering Straight and Russia) will help to promoteautomobile sales. However, Leslie's arch-rival, the evil Professor Fate,vows to beat Leslie to the finish line in a car of his own invention.Gags, mishaps and laughs abound! Starring acting legends including Academy Award-nominee and Golden Globe-winner Tony Curtis as The Great Leslie, Academy Award-winner Jack Lemmon as the evil Professor Fate,Golden Globe-winner Natalie Wood, Emmy Award-winner Peter Falk and dozens more, all scored to the music of four-time Academy Award-winning composer Henry Mancini.