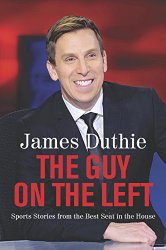 If you’re a sports fan, you know James Duthie.   The biggest games, the biggest trades, the juiciest rumours—chances are Duthie is the guy you tuned in to hear talk about them. There are other experts and insiders, stats guys and analysts, but no one else who can talk about sports with the humour, the knowledge, and the charisma Duthie brings to every event he covers. He also makes the best spoof videos. The Guy on the Left tells the story of Duthie’s career in broadcasting, from a nerdy appearance on a game show to chatting with Tiger Woods in the men’s room at The Masters. It’s a behind-the-scenes look at celebrated moments like Sidney Crosby’s famous game-winning goal at the Vancouver Olympics, but also less celebrated insights, like the disclosure that sports broadcasters often aren’t wearing pants on air. There are stories about goofing around with NHL superstars like Roberto Luongo and Anze Kopitar. There are also stories about wandering into the wrong house after walking his dog and surprising his neighbour in her underwear. His stories can also be serious. Tragedy strikes more than once in the sports world. Most notably, he had to go to air on the evening of September 11, 2001. His reflections on the way sport is part of all of our lives, from the athletes and sports figures on the planes to the kids who lost coaches and parents, are a powerful reminder of both the importance of sport and how lucky we all are to be part of it. Funny, thoughtful, self-deprecating, and wry, The Guy on the Left is everything fans love about James Duthie.