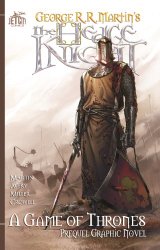 In this comic book/graphic novel adaptation set one hundred years before the events in George R.R. Martin’s epic fantasy series, A Song of Ice and Fire, The Hedge Knight chronicles a young squire as he travels the cruel and complex path to knighthood in the Seven Kingdoms.Shouldering his fallen master’s sword and shield, Duncan (or “Dunk") is determined to reinvent himself as a knight in a nearby tournament. But first Dunk needs a sponsor, and that requirement sends him down a road studded with friends, foes, adventure, and hidden agendas. One such friend is Egg, who becomes Dunk’s squire, yet even he may hold secret motivations of his own.In this gripping prequel, Dunk and Egg seek glory in a world both familiar and new to Game of Thrones fans. What the two fortune seekers encounter, however, is a world of distrust and political machinations. Chivalry is not lost while Dunk holds fast to his dreams of honor. But such outdated virtues make him a target—and they may even lead to his ruin. This vivid and elaborately wrought tale brings new dimension to George R. R. Martin’s beloved world.This edition includes fifteen pages of new supplemental material: sketches, character designs, and original pages by Mike S. Miller, plus variant and original covers.

Do you want ot get the The Hedge Knight: The Graphic Novel (A Game of Thrones)?