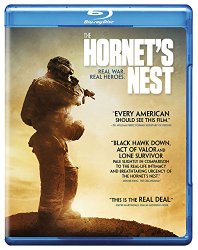 The Hornet's Nest is a groundbreaking and immersive feature film, using unprecedented real footage to tell the story of an elite group of U.S. troops sent on a dangerous mission deep inside one of Afghanistan s most hostile valleys. The film culminates with what was planned as a single day strike turning into nine intense days of harrowing combat against an invisible, hostile enemy in the country s complex terrain where no foreign troops have ever dared to go before. Two embedded journalists, a father and son, bravely followed the troops through the fiercest and most blood-soaked battlegrounds of the conflict. What resulted is an intensely raw feature film experience that will give audiences a deeply emotional and authentic view of the heroism at the center of this gripping story.