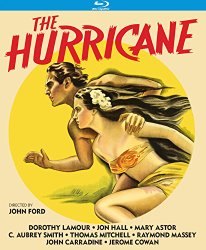 Newly re-mastered in HD! The Hurricane is one of the most spectacular productions of the 1930s directed by the legendary John Ford (The Searchers). An intolerant Governor (Raymond Massey, Arsenic and Old Lace) sets off a series of tragic events in an idyllic Pacific paradise, disrupting the peaceful lives of newlywed islanders Terangi (John Hall, Arabian Nights) and Marama (Dorothy Lamour, My Favorite Brunette). Terangi is wrongly imprisoned by racist officials and after many failed escape attempts, additional years are added to original his six month jail term. Terangi finally succeeds and returns to Marama after a long absence, but only to be confronted with one of the most savage natural disasters to ever hit the island. The devastating hurricane was created by special effects wizard, James Basevi (San Francisco), who used enormous wind machines along with elaborate network of pipes and holding tanks to destroy the native village he had built. Ford acknowledged that assistant director Stuart Heisler (The Glass Key) was the driving force behind The Hurricane, and together they created a highly enjoyable film that stands as a landmark of Hollywood disaster films. The amazing cast includes Mary Astor, C. Aubrey Smith, Thomas Mitchell, John Carradine and Jerome Cowan.Audio Commentary by Film Historian Joseph McBride, the author of Searching For John Ford: A Life | Original Theatrical Trailer