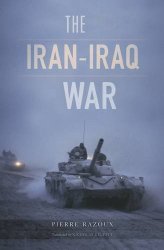 From 1980 to 1988, Iran and Iraq fought the longest conventional war of the twentieth century. The tragedies included the slaughter of child soldiers, the use of chemical weapons, the striking of civilian shipping in the Gulf, and the destruction of cities. The Iran-Iraq War offers an unflinching look at a conflict seared into the region’s collective memory but little understood in the West. Pierre Razoux shows why this war remains central to understanding Middle Eastern geopolitics, from the deep-rooted distrust between Sunni and Shia Muslims, to Iran’s obsession with nuclear power, to the continuing struggles in Iraq. He provides invaluable keys to decipher Iran’s behavior and internal struggle today.Razoux’s account is based on unpublished military archives, oral histories, and interviews, as well as audio recordings seized by the U.S. Army detailing Saddam Hussein’s debates with his generals. Tracing the war’s shifting strategies and political dynamics―military operations, the jockeying of opposition forces within each regime, the impact on oil production so essential to both countries―Razoux also looks at the international picture. From the United States and Soviet Union to Israel, Europe, China, and the Arab powers, many nations meddled in this conflict, supporting one side or the other and sometimes switching allegiances.The Iran-Iraq War answers questions that have puzzled historians. Why did Saddam embark on this expensive, ultimately fruitless conflict? Why did the war last eight years when it could have ended in months? Who, if anyone, was the true winner when so much was lost?