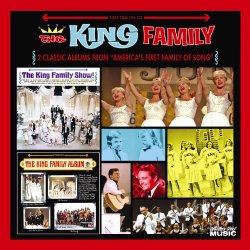 The first two of a staggering six albums that the King Family recorded for Warner Bros. in the space of two years, these came out in early 1965, the same year their weekly ABC TV series The King Family Show was becoming a fan favorite. Their debut The King Family Show! Contains many of the favorites performed by the Family on TV and plays like an episode of their series there s even a commercial break at the mid-point by King Kids Cam & Laurette, a popular, and humorous, feature of their weekly show. Meanwhile, The King Family Album, the Family's second recording effort, raises the rafters with gospel-flavored tracks like He s Got the Whole World in His Hands; Swing Low, Sweet Chariot, and When the Saints Come Marching In, and features other favorites like America the Beautiful; Battle Hymn of the Republic; Shenandoah; You ll Never Walk Alone; Every Man Has a Castle; Open Your Heart; Bluebird of Happiness; Very Last Day, and God Bless the Child. And we round out this release with two more CD debuts the Warner Bros. singles by The King Cousins originally released in 1965, the Phil Spectorish Just One Smile and girl group homage Today I m in Love! Deluxe liner notes with a treasure trove of rarely seen photos make this a true King Family fan's delight.