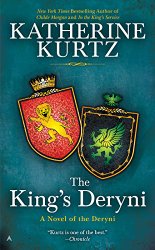 The thrilling conclusion to New York Times bestselling author Katherine Kurtz’s epic Childe Morgan trilogy.   Alaric Morgan has one clear purpose in life—to stand alongside the King of Gwynedd. The old king knew that his successor would benefit from having a Deryni at his side, so Alaric and the young Prince Brion Haldane were bound together by magic—a magic to be called upon when Brion was most in need.   Now that eighteen-year-old Brion has ascended to the throne, seven-year-old Alaric has come to court. Through the coming years, as Alaric learns the extent of his powers and faces the ugliest prejudices against the Deryni, he will experience love, loss, and the hard lessons gained from both. And he will be there to unleash the full power of his Deryni magic at Brion’s command.   For Alaric is—and always will be—the king’s Deryni.

Do you want ot get the The King’s Deryni (A Novel of the Deryni)?

The Interesting Narrative and Other Writings: Revised Edition (Penguin Classics)
The Brothers Karamazov
How to Tie a Tie: A Gentleman’s Guide to Getting Dressed
The Garden of Fertility: A Guide to Charting Your Fertility Signals to Prevent or Achieve Pregnan...
Examples & Explanations: Conflict of Laws, Second Edition
Sleepover Sleuths (Nancy Drew and the Clue Crew #1)