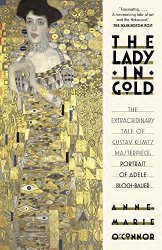 National BestsellerThe true story that inspired the movie Woman in Gold starring Helen Mirren and Ryan Reynolds.Contributor to the Washington Post Anne-Marie O’Connor brilliantly regales us with the galvanizing story of Gustav Klimt’s 1907 masterpiece—the breathtaking portrait of a Viennese Jewish socialite, Adele Bloch-Bauer. The celebrated painting, stolen by Nazis during World War II, subsequently became the subject of a decade-long dispute between her heirs and the Austrian government.When the U.S. Supreme Court became involved in the case, its decision had profound ramifications in the art world. Expertly researched, masterfully told, The Lady in Gold is at once a stunning depiction of fin-de siècle Vienna, a riveting tale of Nazi war crimes, and a fascinating glimpse into the high-stakes workings of the contemporary art world.One of the Best Books of the Year: The Huffington Post, The Christian Science Monitor.  Winner of the Marfield National Award for Arts Writing. Winner of a California Book Award.

Where Good Ideas Come From
Playing with Anxiety: Casey’s Guide for Teens and Kids
BASIC MARKETING: A Marketing Strategy Planning Approach
Interdisciplinary Interaction Design: A Visual Guide to Basic Theories, Models and Ideas for Thin...
One Dish at a Time: Delicious Recipes and Stories from My Italian-American Childhood and Beyond
Successful Coaching-4th Edition