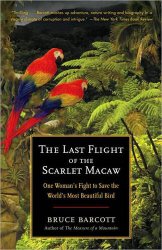 Caring for orphaned animals at her own zoo in the tropical country of Belize, Sharon Matola became one of Central America’s greatest wildlife defenders. And when powerful outside forces conspired with the local government to build a dam that would flood the nesting ground of the only scarlet macaws in Belize, Matola was drawn into the fight of her life. In The Last Flight of the Scarlet Macaw, award-winning author Bruce Barcott chronicles Sharon Matola’s inspiring crusade to stop a multinational corporation in its tracks. Ferocious in her passion, Matila and her confederates–a ragtag army of courageous locals and eccentric expatriates–endure slander and reprisals and take the fight to the courtroom and the boardroom, from local village streets to protests around the globe. Barcott explores the tension between environmental conservation and human development, puts a human face on the battle over globalization, and ultimately shows us how one unwavering woman risked her life to save the most beautiful bird in the world.