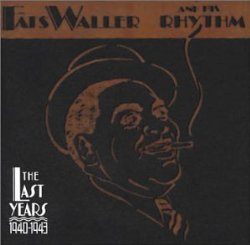 Box sets are an unlikely way to begin collecting an artist, but there's an addictive pull to Fats Waller's work. He was a larger-than-life personality who could leap from earnest sentimentality to outright mockery in the next breath, or take a lightweight novelty tune and make it far more novel with a few verbal and musical touches. While jazz has had numerous pianists who hum, grunt, or mumble while they're playing, Waller was the only one who could turn the compulsion into comic patter, and there have been few pianists who have had a comparable impact on the way the instrument is played. There are 64 tracks on this three CD-set, chronicling Waller's band and orchestra recordings for RCA Victor in the three years before his death, in 1943. As with other volumes in the series, there's a host of surprises. Waller's a fountain of verbal and musical invention, whether it's reinventing the lyrics of Lil Armstrong's "You Run Your Mouth" or creating the delicate organ-guitar dialogue of "Mamacita" with guitarist Al Casey. Two of Waller's most enduring compositions are heard in singular versions here. "Jitterbug Waltz" gets its first performance with Waller playing organ with a big band, while "Ain't Misbehavin'," the last tune here, is heard in an inspired rendition with altoist Benny Carter and drummer Zutty Singleton. --Stuart Broomer