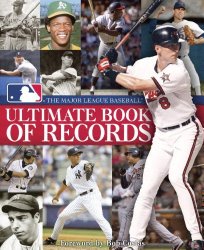 Since the first pitch was thrown, MLB has tracked the performance of every team and player, documented every hit and measured every home run. And while some plays are part of the everyday game, there are moments in baseball when a player's performance reaches a new level of greatness and new records are made. The Major League Baseball Ultimate Book of Records catalogs the game's most remarkable achievements, as well as some of the less traditional and quirky stats that all play a part in the game.      MLB's team of in-house writers, researchers and historians have scoured the history of the game and written the most accurate, complete and definitive record of baseball stats and achievements. Major League Baseball Ultimate Book of Records documents the absolute best of the best and packs each achievement into this lavishly illustrated book where fans will be treated to never-before-seen photographs of their favourite players. Double-page spreads will show Henderson racing to second base to claim the stolen base record, while another full color spread celebrates Bond's crushing hit that set a new threshold for most home-runs.      All the records are here, each with an account of events and spectacular photographs that make this truly the most spectacular baseball book ever published.