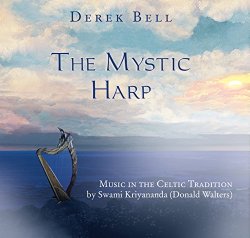 Derek Bell, of the Chieftains captures the haunting, mystical quality of traditional Celtic music on this solo album of original melodies by Swami Kriyananda. Derek played harp for over 25 years with five-time Grammy Award-winning group, The Chieftains Ireland's best-known interpreters of traditional Celtic music. Classically trained, Bell joined the group in 1972, after a distinguished career as a harpist with the Northern Ireland BBC Orchestra, and as a professor of harp and Irish harps at the Belfast Academy of Music. For many years, The Chieftains have been the most influential of the Irish folk musicians, credited with doing more to spread the appreciation of traditional Irish music than any other group in Ireland's history. Bell, a resident of Northern Ireland, had several solo albums to his credit. He composed three piano sonatas and Symphony in E-flat for orchestra, and was the recipient of the Manns Prize from the Royal College of Music.

Do you want ot get the The Mystic Harp?