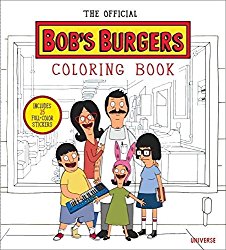 The first and only coloring book based on Fox’s Emmy-winning animated hit TV show.   Crossing the line from line art to Pop Art, The Official Bob’s Burgers Coloring Book follows in the best-selling pop-culture coloring book footsteps of Star Wars, Game of Thrones, Doctor Who, The Walking Dead, and Outlander. This collection serves up not only images of the best moments of the show, but also enough puns and fun to have the show’s ravenous fans salivating with hunger and hilarity. Bob’s Burgers is enjoying a true pop- cultural moment, with an original comic-book version by Dynamite Entertainment still setting records since its launch in 2014, a soundtrack album of original music from the series featuring music from indie band Sleater-Kinney (Portlandia’s Carrie Brownstein), and now an ongoing, multi- city live tour that presents the cast and crew re- creating some of the most popular episodes in front of packed houses across the country.