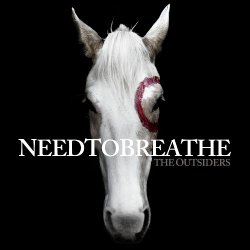 Needtobreathe's third studio album, The Outsiders is slated for an August 25, 2009 release. Recorded from the end of 2008 through April 2009 with Jim Scott, John Alegia and Rick Beato, fans will be reintroduced to the versatility they knew from their previous album, The Heat. The Outsiders truly finds NEEDTOBREATHE coming into their own, seamlessly blending ambient, arena-ready soundscapes with a decidedly Southern sensibility.