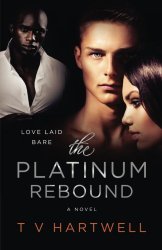 In this sequel to The Platinum Triangle, the tangled saga of Jake, Amanda, and Kirby continues. Hearts are broken, trust is compromised, and secrets are exposed as the trio struggle on their path to finding true love. After being deceived into believing that he had to call off his engagement to Amanda to save her from herself, Jake turns to Kirby—his longtime confidant and roommate—for consolation and emotional support. But Kirby has other ideas in mind now that the guy he loves is single and available again. Meanwhile, Amanda attempts to piece her life back together after her unexpected and devastating breakup with Jake. However, that becomes a little hard to do when a nagging illness turns out to be more than a common cold. Nevertheless, she perseveres and pushes her way out of the dark cloud in which she finds herself, emerging as a new woman just as Adam Weinstock, the hot shot, Hollywood producer whom she’d once dated, swoops in to save the day. On the rebound with the Oscar nominated producer at her side, Amanda soon becomes a darling of the red carpet and a favorite among celebrity watchers and the glitterati. However, after Jake takes notice of Amanda in her high profile, budding romance with a guy he despises, he begins to question the multi-million dollar deal he was offered to stay away from her. "Why him and not me?" But will the truth about their demise as a couple be revealed when Jake starts searching for answers? **This book is intended for mature readers (18+) and contains adult situations, including M/F and M/M sexual intimacy.