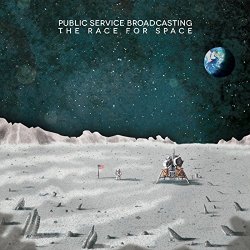 Following the critical and commercial success of their debut album last year and 18 months extensive touring & festival appearances, Public Service Broadcasting are pleased to confirm the release of their eagerly anticipated second album, The Race For Space. To mark the occasion, the band will perform two very special live transmissions from the National Space Centre, Leicester, on 26 & 27 February 2015 these shows sold out in under 24 hours. After touring USA/Aus/NZ/Canada, PSB will embark on a major UK tour in April / May dates below. Before all of this, they will be playing 14 dates as the sole support to Kaiser Chiefs on their UK arena tour where they expect to play to 80k+ people around the country dates below. Recorded at The Pool Studios and Abbey Road in London and, once again working with exclusive archive footage from the British Film Institute, the new record will tell the story of the American & Soviet space race from 1957 1972 via the duos eccentric mix of guitar-driven electronica, propulsive drumming and spoken word samples culled from this uniquely rich period of modern history. The Race For Space follows Inform Educate Entertain, Public Service Broadcasting s debut album which reached #21 in the UK album charts and was nominated for Best Independent Album at the AIM Awards 2013, as well as being The Guardian s Album of the Week and one of BBC 6Music s Top 10 albums of 2013. Press Highlights: They blend the voices of the past with the music of the present to astounding effect The Independent // Genuinely original, innovating and amazing Artrocker Album of the Month // Time Out Inspirational stuff // BBC6 Music: Absolutely, sensationally brilliant Top 10 Albums of 2013. Adrenalised post-rock and electronics..gripping; 4* Mojo // A sampladelic delight; 4* Independent on Sunday // Terrific; GQ // Brilliant; Q Magazine // An extraordinary debut; The 405 // A truly exciting, original and innovative band; Loud & Quiet. Short biog: Taking in archive material from a variety of sources the new album sees the corduroy-clad J. Willgoose, Esq. and his faithful drumming companion, Wrigglesworth, continue their mission statement to Inform, Educate & Entertain. Through both the record and their uniquely spell-binding live audio-visual Transmissions , audiences witness the band weave samples from these films around live drums, guitar, banjo and electronics, creating an array of diverse tracks. What emerges is, by turns, thrilling, moving, funny and powerful. The Independents Simon Price said of the band : In their love of history, and their understanding of the dignity of the wartime generation, they remind me of British Sea Power, although Stereolab are closer sonically. PSB are progressive without the florid ornamentation of Prog, dense and complex with not a semiquaver wasted. It's an industrious, diligent sound, and, in the flesh, surprisingly danceable: slamming chemical beats accompanied by old cine footage, providing a peculiar opportunity to party to Pathe news

Do you want ot get the The Race For Space?