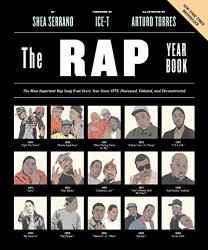 ****New York Times Best Seller**** ****Washington Post Best Seller********Arts and Entertainment iBooks Best Seller********Pitchfork Book Club selection**** Here's what The Rap Year Book does: It takes readers from 1979, widely regarded as the moment rap became recognized as part of the cultural and musical landscape, and comes right up to the present, with Shea Serrano hilariously discussing, debating, and deconstructing the most important rap song year by year. Serrano also examines the most important moments that surround the history and culture of rap music--from artists' backgrounds to issues of race, the rise of hip-hop, and the struggles among its major players--both personal and professional. Covering East Coast and West Coast, famous rapper feuds, chart toppers, and show stoppers, The Rap Year Book is an in-depth look at the most influential genre of music to come out of the last generation.  Complete with infographics, lyric maps, uproarious and informative footnotes, portraits of the artists, and short essays by other prominent music writers, The Rap Year Book is both a narrative and illustrated guide to the most iconic and influential rap songs ever created. It's like the gold tank from Master P's "Make 'Em Say Uhh!" video, except it's a book. It's like Kanye's verse on "Put On," except it's a book. It's like the face Biggie made when he was on the boat with Puffy in "Hypnotize," except it's a book.

Do you want ot get the The Rap Year Book: The Most Important Rap Song From Every Year Since 1979, Discussed, Debated, and Deconstructed?

A Deeper Love Inside: The Porsche Santiaga Story
Forgotten: The Untold Story of D-Day’s Black Heroes, at Home and at War
Dork Diaries 6: Tales from a Not-So-Happy Heartbreaker
Artists Living with Art
The Little World of Liz Climo
Rodeo & Western Riding