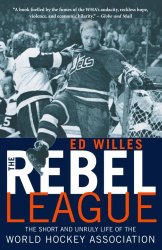 The wildest seven years in the history of hockeyThe Rebel League celebrates the good, the bad, and the ugly of the fabled WHA. It is filled with hilarious anecdotes, behind the scenes dealing, and simply great hockey. It tells the story of Bobby Hull’s astonishing million-dollar signing, which helped launch the league, and how he lost his toupee in an on-ice scrap.It explains how a team of naked Birmingham Bulls ended up in an arena concourse spoiling for a brawl. How the Oilers had to smuggle fugitive forward Frankie “Seldom” Beaton out of their dressing room in an equipment bag. And how Mark Howe sometimes forgot not to yell “Dad!” when he called for his teammate father, Gordie, to pass. There’s the making of Slap Shot, that classic of modern cinema, and the making of the virtuoso line of Hull, Anders Hedberg, and Ulf Nilsson.It began as the moneymaking scheme of two California lawyers. They didn’t know much about hockey, but they sure knew how to shake things up. The upstart WHA introduced to the world 27 new hockey franchises, a trail of bounced cheques, fractious lawsuits, and folded teams. It introduced the crackpots, goons, and crazies that are so well remembered as the league’s bizarre legacy.But the hit-and-miss league was much more than a travelling circus of the weird and wonderful. It was the vanguard that drove hockey into the modern age. It ended the NHL’s monopoly, freed players from the reserve clause, ushered in the 18-year-old draft, moved the game into the Sun Belt, and put European players on the ice in numbers previously unimagined.The rebel league of the WHA gave shining stars their big-league debut and others their swan song, and provided high-octane fuel for some spectacular flameouts. By the end of its seven years, there were just six teams left standing, four of which – the Winnipeg Jets, Quebec Nordiques, Edmonton Oilers, and Hartford Whalers – would wind up in the expanded NHL.From the Hardcover edition.

Enrique’s Journey (The Young Adult Adaptation): The True Story of a Boy Determined to Reuni...
The Pastures of Beyond: An Old Cowboy Looks Back at the Old West
Designing Clinical Research
The Economics of Inequality
Flour: Spectacular Recipes from Boston’s Flour Bakery + Cafe
Suspect