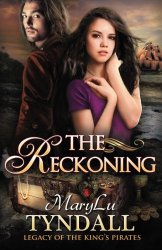 The Reckoning is a rollicking time travel adventure that plummets the reader into a world of treachery, adventure, and romance. Trust me. You won’t want to miss this one! Michelle Griep, author. When Morgan Shaw crept into the hold of an old pirate ship replica at San Diego’s Annual Tall Ship Festival, her only intention was to avoid the guy who had just dumped her and who was now boarding the ship with two women on his arm. What she didn’t expect was to wake up aboard a real pirate ship three-hundred years in the past. But of course, it wasn’t real. Her wealthy father had obviously staged it all in an effort to get her mind off her upcoming chemo. Or had he? Pirate Rowan Dutton seeks enough treasure to repay a debt to his sister and reinstate the Dutton name among British Jamaican Society. He is but one major haul away from accomplishing his goal when a strange woman appears on his ship and causes him to lose his prey. Despite his anger, he is enthralled with the little minx, her strange clothing, odd speech, and her insistence that they are all actors playing a charade paid for by her father. Yet when the brazen little lady divulges Rowan’s secret to a longtime nemesis, events are triggered that could cost them both their lives and change the course of history forever. Categories >Pirate Romance >Inspirational Romance >Time Travel Romance >Historical Romance >Romantic Suspense >Christian Romance >Clean Pirate Romance

Fun Home: A Family Tragicomic
At Home in the Whole Food Kitchen: Celebrating the Art of Eating Well
Becoming Mrs. Lewis: The Improbable Love Story of Joy Davidman and C. S. Lewis
The Poems of T. S. Eliot: Collected and Uncollected Poems (Volume 1)
The Rainbow Fish
Back in the Game: A Stardust, Texas Novel