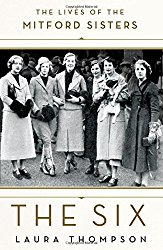 “Riveting. The Six captures all the wayward magnetism and levity that have enchanted countless writers without neglecting the tragic darkness of many of the sisters’ life choices and the savage sociopolitical currents that fueled them.” – Tina Brown, The New York Times Book Review The eldest was a razor-sharp novelist of upper-class manners; the second was loved by John Betjeman; the third was a fascist who married Oswald Mosley; the fourth idolized Hitler and shot herself in the head when Britain declared war on Germany; the fifth was a member of the American Communist Party; the sixth became Duchess of Devonshire.They were the Mitford sisters: Nancy, Pamela, Diana, Unity, Jessica, and Deborah. Born into country-house privilege in the early years of the 20th century, they became prominent as “bright young things” in the high society of interwar London. Then, as the shadows crept over 1930s Europe, the stark―and very public―differences in their outlooks came to symbolize the political polarities of a dangerous decade.The intertwined stories of their stylish and scandalous lives―recounted in masterly fashion by Laura Thompson―hold up a revelatory mirror to upper-class English life before and after WWII. The Six was previously published as Take Six Girls.

Crimson Cowboy: The rise and fall of a three-time champion
Essential Works of Lenin: “What Is to Be Done?” and Other Writings
The Filipino Instant Pot Cookbook: Classic and Modern Filipino Recipes for Your Electric Pressure...
Telling Lies: Clues to Deceit in the Marketplace, Politics, and Marriage
Uncle John’s Political Briefs
Zen and the Art of Motorcycle Maintenance: An Inquiry Into Values