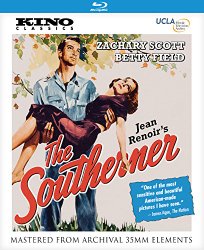 "After achieving worldwide acclaim for such films as La Grande Illusion and The Rules of the Game, French filmmaker Jean Renoir briefly worked in the United States, where he wrote and directed this adaptation of George Sessions Perry s novel Hold Autumn in Your Hand. The story follows the struggles of an idealistic farmer (Zachary Scott) trying to raise a family and a crop of cotton in the face of extraordinary challenges, both natural and societal.Visually influenced by the documentary work of Pare Lorentz and Robert Flaherty, and assisted in the dialogue-writing by William Faulkner, Paris-born Renoir crafted a portrait of rural life that is honest, unsentimental, and filled with the emotional subtleties for which the director is best remembered. The Southerner earned three Academy Award nominations (Best Director, Original Music Score, and Sound). This Kino Classics edition was mastered in HD from a 35mm restoration performed by the UCLA Film and Television Archive."Special Features: A Salute to France (1944, 35 min., dir: Jean Renoir and Garson Kanin), The River (1938, 31 min., dir: Pare Lorentz)