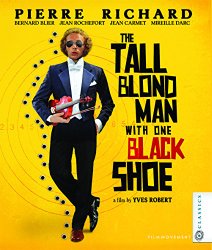 A frothy French farce, The Tall Blond Man with One Black Shoe is the blockbuster 1972 madcap comedy about mistaken identity and mixed signals. When an unsuspecting violinist is misidentified by the head of a spy network to his assistant as the target of their investigation and a superspy himself, a series of wacky misunderstandings and silly situations ensues. As the assistant, his henchman (and Jean Rochefort as one knock-out henchwoman) fall all over each other in their misguided attempts to discover the alleged superspy's vital secrets, his best friend happens by and only further complicates things, assuming his wife is having an affair after overhearing a salacious tape recording of her voice. The whole merry-go-round comes crashing to a halt in one final hilarious showdown between spies (and supposed spies). Elegantly filmed and accompanied by a lively score, The Tall Blond Man With One Black Shoe is a delightfully outrageous romp that has taken its place among the great French comedy classics of the 1970s. Beautifully restored in HD, this classic film is now released for the first time in North America on Blu Ray and DVD. Bonus Content, includes: Film essay by top film critic and writer, Nick Pinkerton, and original theatrical trailer.