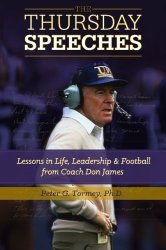 The Thursday Speeches pulls back the curtain to put readers in the room with exclusive access to the compelling pregame speeches from one of the best college football coaches in history. The book reveals the exact words James used to inspire the Huskies to slay the football giants of his day. It features the inspiring stories and invaluable life lessons that Coach Don James used to transform the University of Washington football program from obscurity to the national championship during his legendary 18-year UW career. This book underscores the power of words in leadership, and offers powerful examples to develop leadership skills and influence and inspire teams to control their destiny. Two days before Christmas 1974, Don James seized the reins of a Washington football program in disarray. Immediately, James challenged players to do the hard work necessary to get to the Rose Bowl. Some players laughed, reminding James that Washington hadn't been to the Rose Bowl since 1963. James insisted on his vision. In his third season, the Huskies advanced to the Rose Bowl and - led by future Pro Football Hall of Fame quarterback Warren Moon - beat the heavily favored Michigan Wolverines.As but one measure of his coaching skill, Sports Illustrated once named the three best college football coaches in the country: No. 1, Don James; No. 2, Don James; No. 3, Don James.A member of the College Football Hall of Fame, the Husky Hall of Fame, and twice named National Coach of the Year, James remains the most successful football coach in Washington and the Pacific-12 Conference history. President of the American Football Coaches Association in 1989, James compiled a record of 153-57-2 at Washington and led the Huskies to 15 bowl games (10-5) including nine straight from 1979-1987. He guided the Huskies to six Rose Bowls and is one of only four coaches to win four Rose Bowl games. His 1991 team finished the season 12-0, beat Michigan in the Rose Bowl, and was named National Champion by USA Today/CNN, UPI, the Football Writers, Sports Illustrated, and several computer rankings.The book, which also contains new insights into James' leadership, is organized into four sections:Part I: Getting to the Rose Bowl.Part II: Themes of the Thursday Speeches: Attitude; Life Lessons; Competitive Greatness; and Visualizing Victory.PART III: Glimmers - Short essays derived from interviews with Coach James.PART IV: A Lasting Legacy - Tributes to Coach James' influence from Coach Gary Pinkel, University of Missouri; Coach Nick Saban, University of Alabama; Sam Wick, friend; Jeffrey James, grandson; James' pastor, Rev. Jerry Mitchell; and Jill Woodruff, one of James' three children.The book stems from Tormey's doctoral research in Leadership Studies (Gonzaga University). James wrote the speeches before practice each Wednesday, by longhand, on 11-by-14-inch yellow legal pads.Exhibiting a voracious appetite for reading and an expansive intellect, James uses a wide range of powerful stories to engage the Huskies including topics such as Freud and Frankl, the Cheshire Cat in Alice's Adventures in Wonderland, the benefits of suffering, the importance of attitude, the key to problem-solving, and the true meaning of fun. He fashions speeches around figures such as George Washington Carver, Benjamin Franklin, Julius Caesar, Vince Lombardi, and Helen Keller, and many others.James' transformation of the UW program proves what scholars have theorized: Leaders skilled with language have the power to literally speak things into being.Also includes best quotes on winning attitude; visualization techniques for athletes; motivational quotes for athletes; inspirational sports quotes about teamwork; principles of success; greatest college football coaches of all time; best quotes on business leadership.

The Doubtful Guest
Street Poison: The Biography of Iceberg Slim
Raising Kids to Thrive: Balancing Love With Expectations and Protection With Trust
13 Hours: The Inside Account of What Really Happened In Benghazi
Snowden
Power Speed ENDURANCE: A Skill-Based Approach to Endurance Training