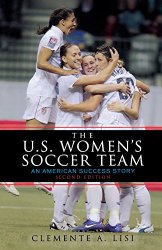 In this new edition—updated through the team’s spectacular win at the 2012 London Olympics—Clemente A. Lisi examines how the sport of women’s soccer has gained popularity over the past few decades. While other books have been written about the team during a specific year, such as those focused solely on the 1999 World Cup win on U.S. soil, Lisi details the program's infancy and how it steadily became a model for women's teams around the globe.Beginning with the start of the U.S. program in 1985, Lisi recounts the development of the women’s team, highlighted by their two first place finishes in the Women’s World Cups (1991 and 1999) and four Olympic women’s gold medals (1996, 2004, 2008, and 2012). In addition to chronicling the history of the team as a whole, this book offers mini profiles and photographs of some of the best players over the years, including Julie Foudy, Amy Rodriguez, Hope Solo, and Mia Hamm.